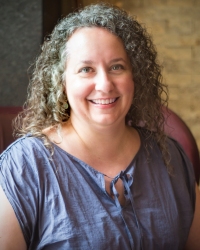 Beth Blickers is currently an agent at APA, where she represents writers, composers, directors and choreographers for theatre, television and film. She began her career at the William Morris Agency, where she began work after graduating from New York University. She is currently serving a two year term as the President of LMDA.

She has served on the jury panel for the Weissberger Award, the Ed Kleban Award, the Lark’s PONY Fellowship, participated in the Non-Traditional Casting Project, Inc.’s roundtable on inclusion and diversity in the theatre, and has presented workshops and sessions on agenting, playwriting, directors and choreographers and related topics for organizations such as the Society of Directors and Choreographers Foundation, the Dramatists Guild, Musical Theatre Works, the Lark, New York University, the National Alliance for Musical Theatre and the Texas Education Theatre Association.

She is a member and Board member (President) of Literary Managers & Dramaturgs of the Americas (LMDA), and is proud to be the board chair emeritus of Theatre Breaking Through Barriers, a New York company that works with artists with disabilities.