By Jenna Tonsor and Lydia Baxter

The Four Seasons are one of the best-selling American rock & roll groups to come out of the 1960s.

The group has upwards of 25 chart-topping hits, and has influenced countless other musicians through their signature sound. This prominent all-male band featured Tommy DeVito, Bob Gaudio, Nick Massi (who was replaced by Joe Long in 1964), and of course, lead vocalist Frankie Valli.

They inspired the highly acclaimed 2006 Tony Award-winning jukebox musical, Jersey Boys. This Broadway hit took home the award for best musical, along with three other Tonys. It even managed to snag a Grammy Award for best musical show album the following year. Due to its popularity, the musical was adapted into a film by Clint Eastwood in 2014.

So what made this group and their music so irresistible? And what has kept their music in the limelight for nearly six decades?

Like most success stories, The Four Seasons’ journey began humbly. Originally a Newark-based vocal group called “The Varietones” and then briefly “The Four Lovers,” these “Jersey boys” developed a harmony-based style influenced by Italian American doo-wop groups. Much like the African American groups who preceded them (and are credited for the creation of doo-wop as a distinct musical style), Italian American doo-wop groups infused their songs with aspects of their own musical and cultural heritage. Members of these groups were often young men living in rough areas like The Bronx and Chicago. The Four Seasons were no exception, gathering in the streets of Newark, New Jersey, where the lampposts served as their first spotlights.

When the British Invasion hit, many American bands struggled to gain recognition and acclaim. By blending the doo-wop sounds of the ‘50s with rhythm and blues, The Four Seasons were able to remain distinct and recognizable after Beatlemania. Even as girl groups, British boy bands, and Motown started to gain prominence, the group managed to make the Top 10 on the music charts not once, but thirteen times, between 1962-1967. 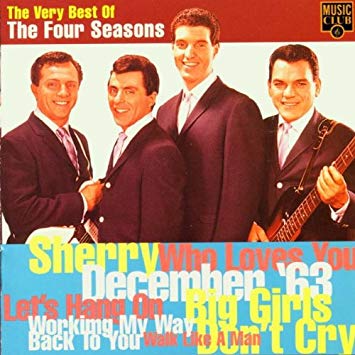 Their enduring success began with “Sherry,” a song written by their very own Bob Gaudio, which was released in 1962 and supposedly “only took about 15 minutes to write.” But “Sherry” was just the beginning—favorites like “Big Girls Don’t Cry,” “Walk Like a Man,” and “Candy Girl” rose to #1 on the music charts that same year (1962). Once the public had a taste of The Four Seasons, they were hooked. But it was the lead singer’s distinct brand of piercing falsetto ranging three octaves that audiences couldn’t get enough of—and what the band is best remembered for today.

Sadly, the boys said “Bye Bye Baby” to the stage in 1977, after they had changed their name to “Frankie Valli and the Four Seasons” in an effort to highlight the lead singer’s marketability. However, the break up made no baby out of Frankie Valli, who quickly gained solo recognition and has toured continuously ever since.

The group’s music never really disappeared—their songs have been featured in movies like Dirty Dancing, Mrs. Doubtfire, Conspiracy Theory, and The Wanderers, and is sprinkled throughout the critically acclaimed drama The Sopranos. Frankie Valli himself even appeared in the fifth and sixth seasons of the show as mobster Rusty Millio. Almost 200 musicians have recorded covers of “Can’t Take My Eyes Off You,” further ensuring that the group’s legacy lives on.

Who Loves You: Musical Tribute to Frankie Valli and Beyond is now playing in FST’s Goldstein Cabaret. To purchase tickets or for more information, click here.