Florida Studio Theatre’s Children’s Theatre is soaring to new heights. Now, featuring a season that is just as robust as this Winter’s Mainstage, Children’s Theatre has an expanded lineup full of magic, adventure, and holiday spirit for the whole family.

First up is a n

ew take on the timeless classic, Robin Hood, a swashbuckling tale full of swordfights, archery, and even a smooch or two. Then, just in time for the holidays, we’re getting into the spirit with Deck the Halls, an all-new holiday cabaret featuring a cast of Florida’s favorite little elves who audiences just might remember from last year. Beginning in February, we dive into a magical world where it’s always winter, but never Christmas, with The Lion The Witch and The Wardrobe, the classic tale by C. S. Lewis. Our Children’s Theatre season concludes with The Boy Who Liked Pulling Hair, a series of short plays written by children, for children.

Pre and post-show activities get audiences on their feet and involved in the major themes and concepts of the plays. Schools come by the bus-load to see performances during the week, and the shows are open to the public on Saturday mornings.

A season subscription for all four shows is just $20. Thanks to a generous grant from Bank of America and FST’s individual donors, the cost stays shockingly low so that as many families as possible have access to these magical adventures and memories.

While Children’s Theatre has grown in number of performances, it has also expanded in outreach. Children and family programming continues to grow here in Sarasota. But now Florida Studio Theatre’s children’s programming is reaching beyond state lines. FST has planned a week-long visit to Camden, NJ, and is continuing our ongoing partnership with Chautauqua, NY to bring live theatre and playwriting to an unprecedented number of young people. 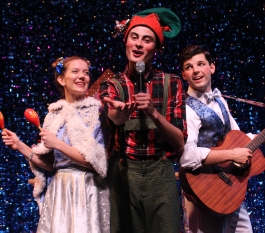 Back here at home in Sarasota, FST continues to expand its impact by bringing the art of theatre to under privileged schools in the community. Your school doesn’t have a stage? That’s okay! If there is a library, a cafeteria, or even an empty classroom, our talented actors can perform almost anywhere.

Caroline Kaiser, Director of Children’s Theatre shares, “Florida Studio Theatre has been creating theatre for young audiences in the schools for over 25 years. In talking with our audiences, we realized there was a real need for something to do as a whole family on the weekends. In response, last year, we had our inaugural season of our Saturday Morning Children’s Theatre series, and it took off just as we had hoped. In a time when our lives can feel so busy, it is refreshing to see many families prioritizing time together, and choosing to spend that time with us at FST. I look forward to another season of adventures and making memories that will last a lifetime.”