An interesting look at a similarThis article was written in the Sarasota Journal in July 1, 1959.

RACINE, Wis (AP) A Florida segregation leader and a publisher of children’s books disagreed sharply today over the social signifigance of a modern version of “The Three Little Pigs.”

The Whitman Publishing Co., of Racine, contends its version of the old folk tale in “Whitman Tell a-Tale Books,” white has the pigs as white, black and white and black, does nothing more than tell a story to children.

“Black and white are sharply contrasting colors as shown by the black ink universally used for printing words on a white page,” said Lloyd E. Smith of the Whitman company, “For this uncomplicated reason black and white animals are sometimes shown together in children’s books.” 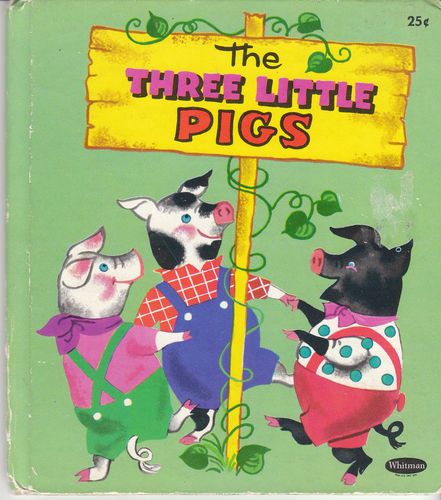 David Hawthorne of Miami, Fla., however, claims that “clever integrationists are using the tale to brainwash youngster” with a version picturing a black pig as superior to a white because he built his house of brick and it wasn’t destroyed.

Hawthorne, however, did not impress Florida legislators with his efforts to get a bill introduced to ban the book from schools and libraries.

Hawthorne claims the pig story published by Whitman is worse than the rabbit story that came under attack in Alabama.  In Alabama, the protests shoved from public libraries “The Rabbits’ Wedding.” a story about a black rabbit and a white rabbit.

He claimed that originally all the pigs were white but about seven years ago the book began appearing with two of the pigs in color.

Smith said that about a year ago a Florida congressman asked, on behalf of an unnamed constituent, who wrote the text of the story to determine whether it had been written for propaganda purposes.

The author replied, Smith said, “that the color of the three little pigs in her version has no social significance.”  She added, he said, “I have also written stories about a brown bear, a brown beaver, a brown horse, a black and white dog, and a yellow cat, all of whom have, after a suitable number of misadventures, lived happily ever after.”